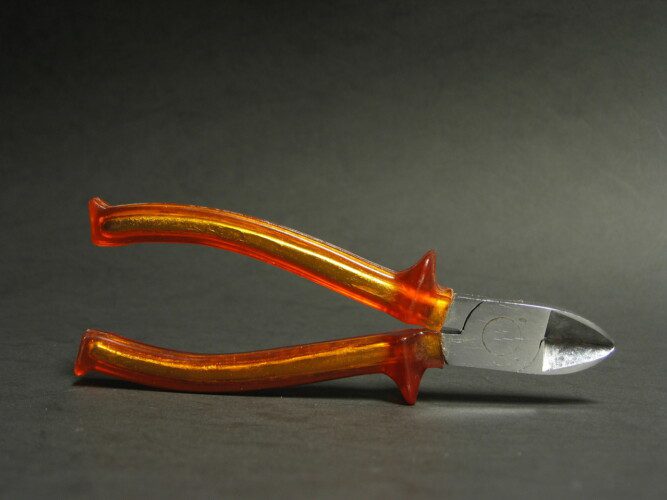 There are always metal or hard plastic parts that need to be custom-made, and cutting them is just the most practical way.

How To Choose A Wire Cutter Pliers For Your Needs.

There are many different materials of different hardnesses and it isn’t difficult to guess if a wire cutter is suitable or not for the job that you have in mind.

For example, even thin metal wires that seem soft at first sight can turn out to be so hard that they literally leave a final imprint on the cutting edge of your favorite wire cutter, and in extreme cases your wire cutter pliers can even break.

In both cases, the conclusion is that the tool was too light to do the job, but knowing that afterward is a little too late for the pliers.

How can you prevent that? To put it this way: you can’t.

You can provide yourself with a whole arsenal of pliers of different calibers, but no matter how well you pay attention and try to take care of your stuff, everyone is going to make mistakes and will find out sooner or later that the workpiece will get a hold off the pliers sometimes instead off the other way around.

Sometimes it can be prevented by first trying it out very carefully on unknown materials with an old wire cutter that is already damaged. It is a matter of experience before you know exactly which pliers to use. And yes, even then it can go wrong. 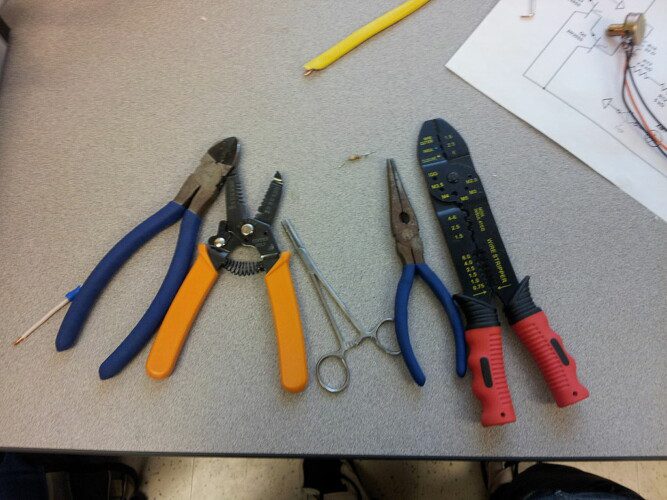 Where to buy wire cutting pliers and which ones should you buy?

In many cases, the cheap wire cutters from the ‘Far East’ are not that bad, here in my house they are also on my work table.

Of course, I also have the brand pliers, but I am very careful with those and they are, with all due respect, often put away when others come to craft with them or if they want to lend them out!

Those cheap pliers are blunt pretty quickly, but the most important thing is that they cost almost nothing and if one of them is broken or just worn out, it hurts my wallet less than the expensive ones. With two, maybe three different sizes of cutters, you are already perfectly equipped to do the job well!

You would need one with a fine jaw, large sturdy combination pliers, old scissors, and a so-called ‘flush cutter’ ( one that can cut wires so that they are flat). With all of these, you should be able to handle most (mini) jobs.

You can find all kinds of sets on Etsy or in your local DIY store.

As always: Watch out!

During the cutting, it’s not only a matter of keeping the pliers in one piece but also yourself (the eyes!)

And, last but not least, other people around you. Again and again, it amazes me that people turn their heads and close their eyes when they expect a piece of wire to pop in their eyes. But apparently, they expect it to fly in their direction only, even if they turn the workpiece away from themselves.

Apparently, giving a warning to people sitting next to them or opposite to them is unnecessary. I have been ‘brought up’ in a DIY surrounding.

If I had done that only once as a kid at my grandparents’ place, my grandfather (bless his soul) would have made sure that I knew it for the rest of my life: hold your other hand in front of the workpiece, so that you can catch cut-off pieces of the material yourself and that they don’t hurt others! Please cut wisely and pay attention to your own health and everyone else’s in the room!

Wirecutter pliers are another piece of material that should probably be basic in your workplace to make miniatures. Although you probably already have some lying around in your house for DIY jobs, it could be useful to buy a set, so that you can try out different ones for our miniature hobby.

Keep posted about further updates on basic crafting materials to make miniatures and bookmark my site! I think we can wrap this category up soon so that you can make sure to get all your supplies purchased and ready to begin this beautiful journey of miniature making! 😉

Have any questions? Feel free to ask them in the comments below.

2 thoughts on “Wire Cutter Pliers And Miniatures – Some Insights”