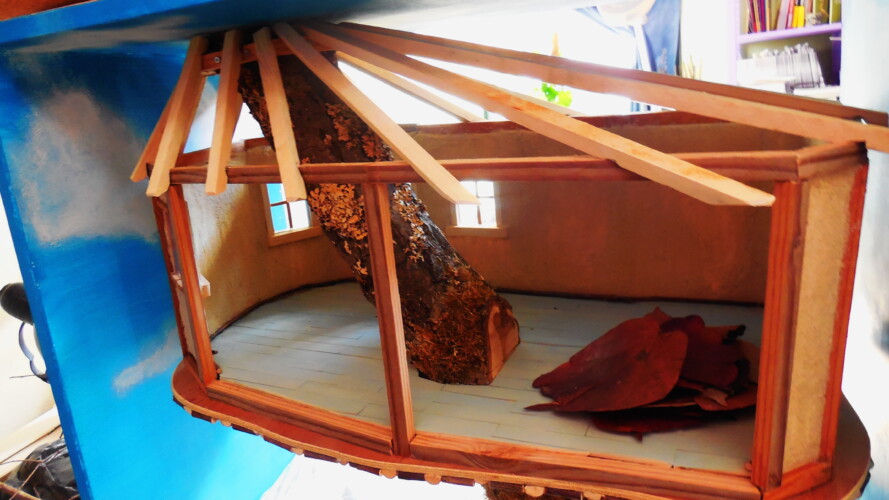 Today I would like to show you some of my personal work in a picture gallery off my mini treehouse.

I will explain how I made my mini treehouse in detail. It was a very lengthy job for sure, but I finally made it and I am pretty proud I did!

Now I need to start working on the kitchen. I am already full of ideas, the only thing is getting to it again that is the hardest part. Do you recognize the feeling? 😉

I have always wanted to make a treehouse with a real branch and I found one that suited my needs in the woods, as you can see in the first picture. Then I made a platform where the rest of the house is built on.

Everything starts with the craft table saw and making wooden beams for your mini treehouse, in the good old-fashioned way! 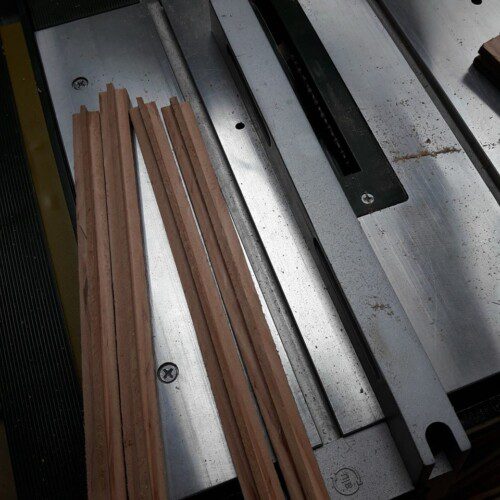 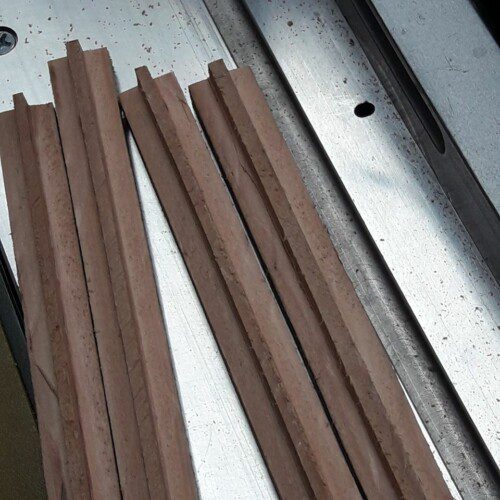 To make the walls, I used architect paper and glued them to the beams with Tacky glue, thé glue most used bye miniaturists. 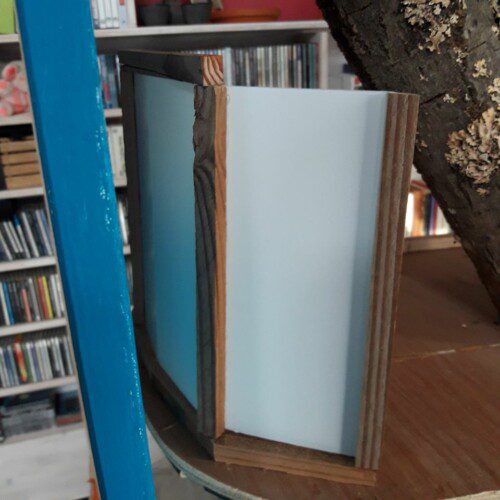 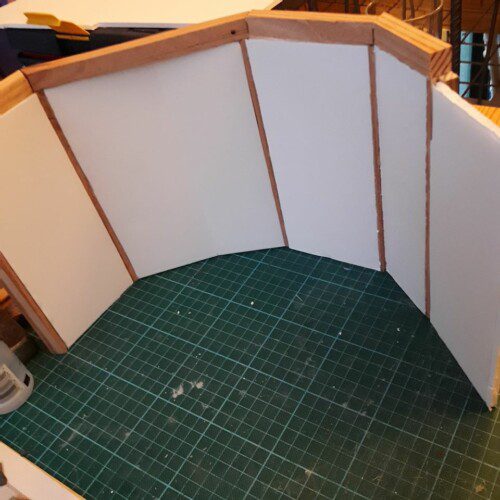 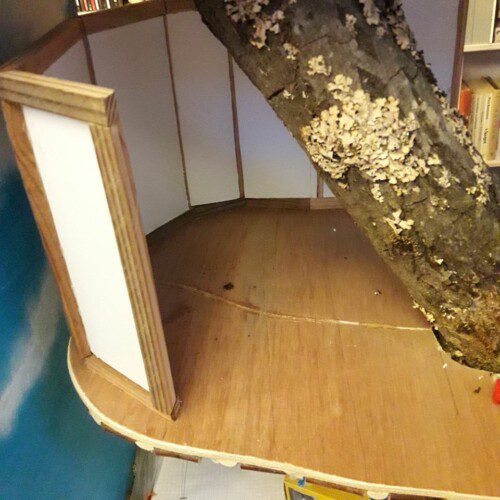 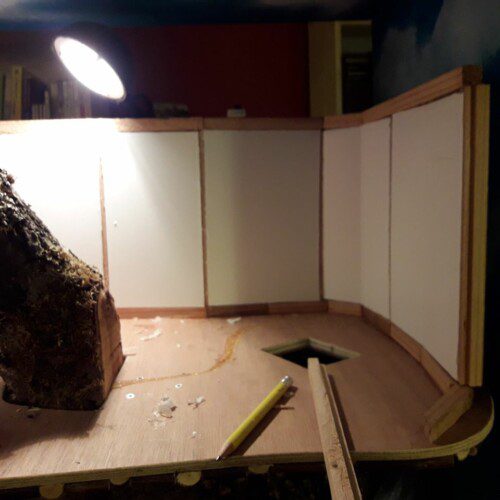 Time to make the windows! For these, I mostly used balsa wood. The windows themselves are pieces of plastic that I recycled. 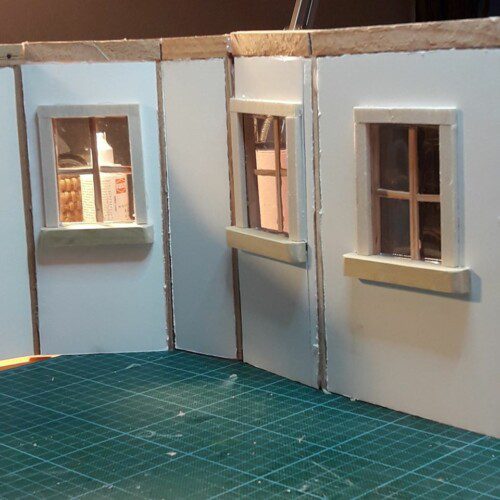 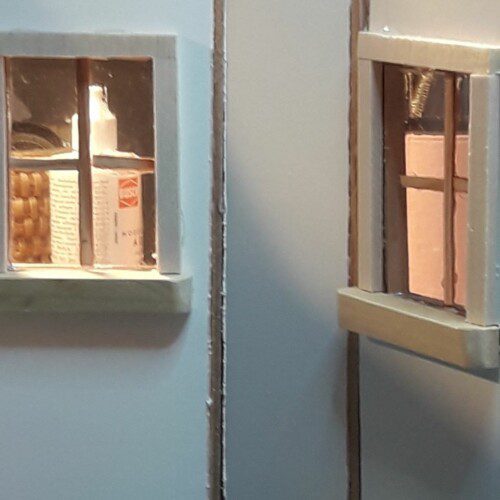 Then I plastered my walls, using Teifoc ‘cement’, made in Germany. I will talk about that more in another article, which will end up in the ‘crafting materials’ category.

As you can see in some pictures, it can get really messy. But I really wanted the walls to be as smooth as possible, and neatly trimmed beside the windows and wooden beams, so I made several layers and used a lot of water to make it look like old German houses. 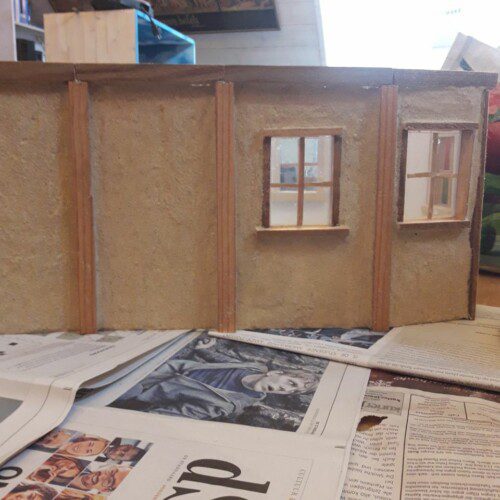 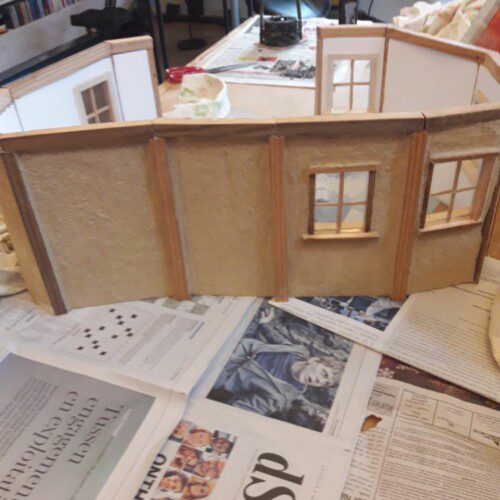 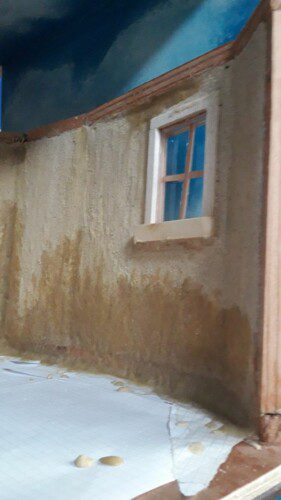 As in reality, I needed straight beams to place the wooden floor on. In case you would wonder what the hole in the floor is for? Well, my inhabitants are going to be ‘trolls’ instead of humans, so they needed a hole and a ladder to be able to get into the treehouse later 😉 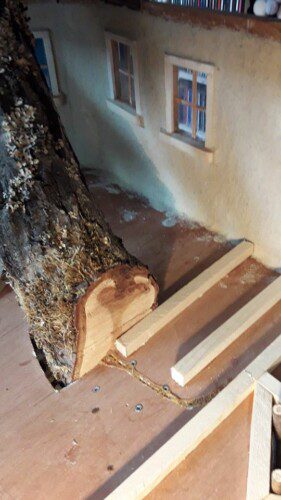 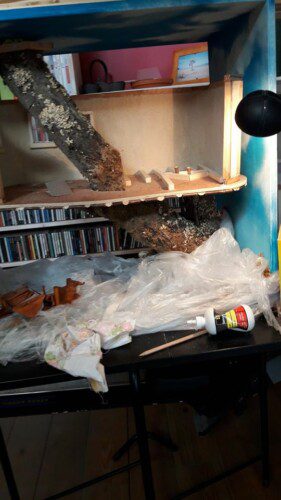 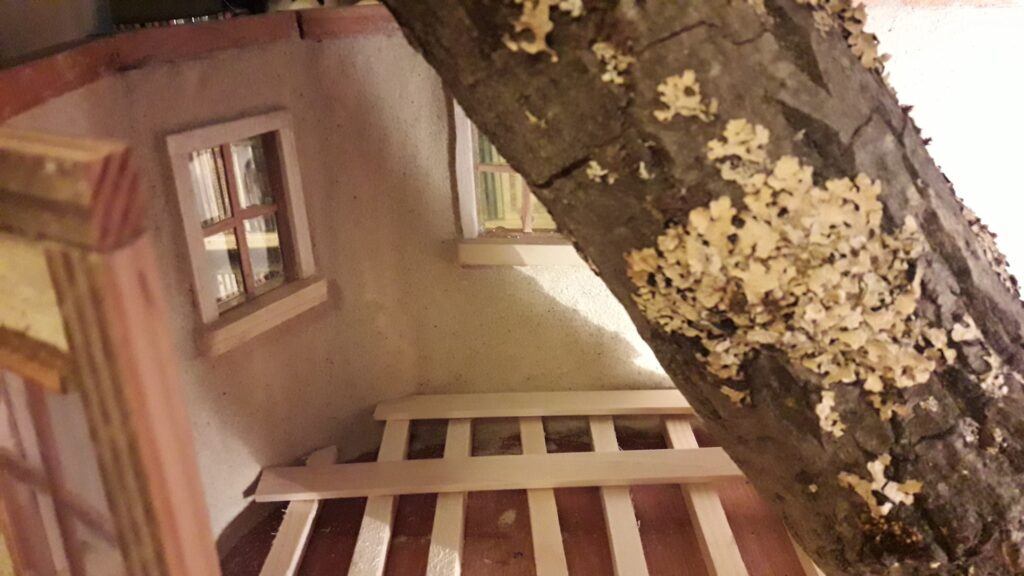 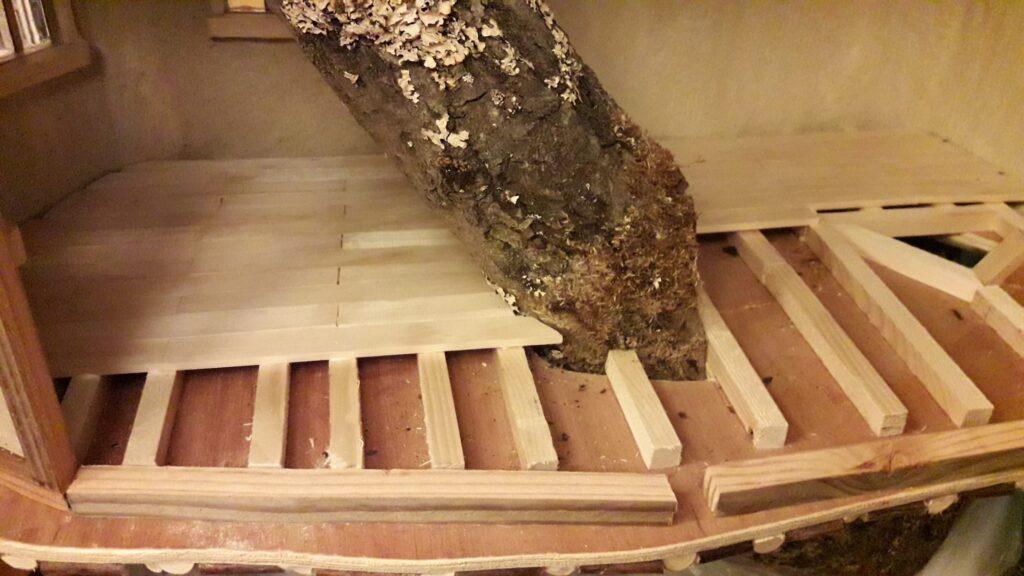 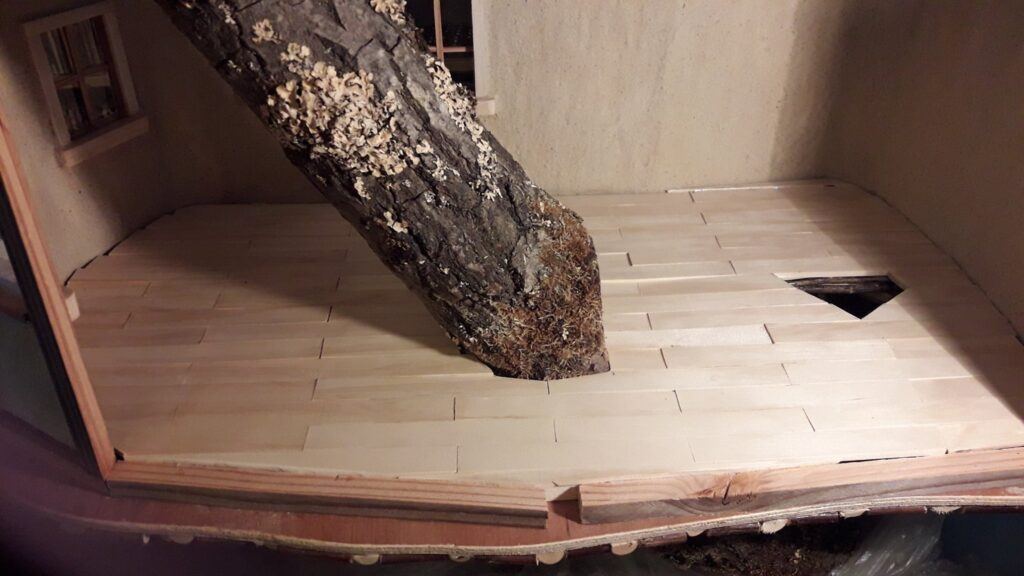 Time to paint! And here is the result so far, do you like the color I picked? : 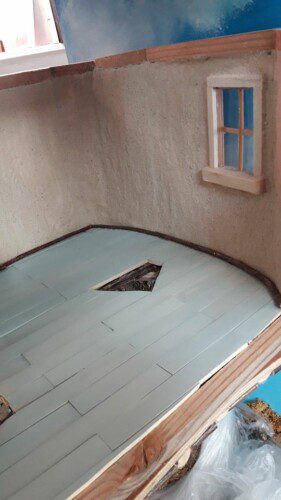 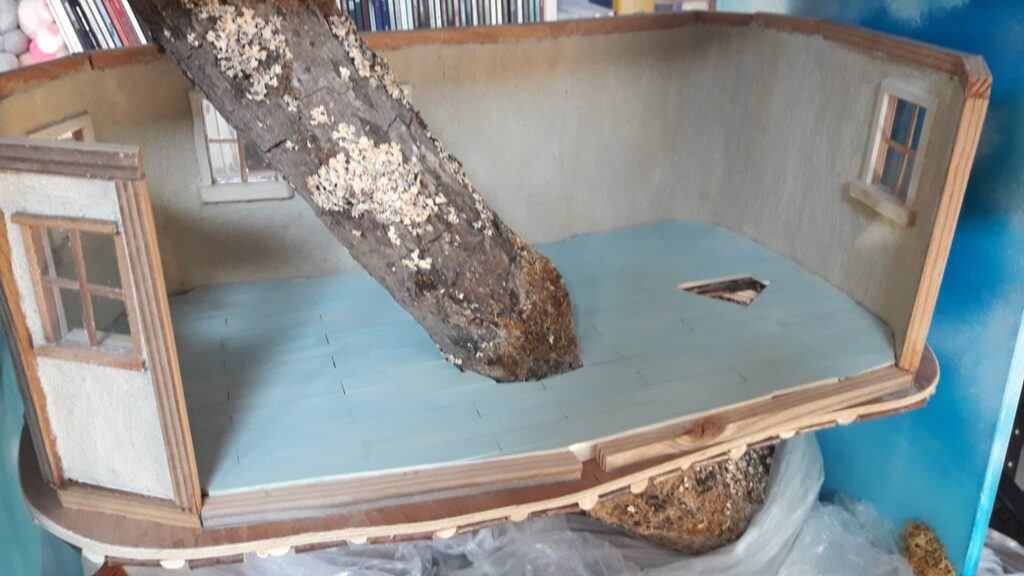 The beams for the roof:

The roof will be added later and it is going to be something special for sure, keep posted!

4 thoughts on “Mini Treehouse-Show You My Personal Work”