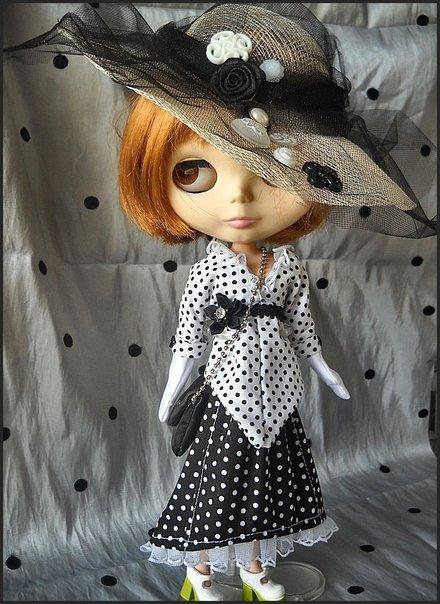 Today in my newest blog post I will try to answer every question you might have on the topic: “what is a Blythe doll”? Because every time that I share a picture of these dolls on my Facebook group, lots of people would like to know more about this 🙂

So I would suggest getting going and dive right into the topic.

What Are Blythe Dolls?

Blythe dolls are dolls that are popular in the world of collectors of vintage and cult dolls.

They have oversized heads and large eyes with the possibility of changing the color and positions of the eyes up to 4 times by pulling a string from a mechanism at the back of their heads.

In this way, you can change the colors of their eyes to match a particular mood, personality, or outfit.

Not just the color can be changed, but also the way they look and they can close their eyelids.

A Little Bit Of History.

The first Blythe doll was made by Allison Katzman in 1972 because she wanted to compete with Barby dolls. She passed away at the respectable age of 95.

During that time, the manufacturer of toys company called Kenner LCC started to produce the dolls. Because of lack of further interest by children in the dolls, however, they stopped making the dolls after one year already.

At the end of the year 2000, the dolls made a comeback in Japan, when a charming TV commercial was produced by CWC (the new license owner and seller), and Blythe was used in it for the Parco department store and supermarket.

All of a sudden, the brand became an overnight sensation all over Japan and Asia.

The result of all this was that the Blythe dolls produced at the early start, received a ‘cult’ status over time and now are sold for almost 1000 dollars, or more. (nowadays the new ones have an average cost of about $120 per piece).

The American company called Ashton Drake Gallery also tried to produce the dolls for the American market, but they didn’t become as popular as the ones from Japan.

These days, and still in 2021, Blythe dolls seem to have a huge and worldwide fanbase.

What Is A Neo-Blythe Doll?

So because of the newest interest from the Blythe fanbase, in June 2001, CWC produced an 11-inch doll called the “Neo-Blythe doll”, with the help of manufacturer Takara Co., a Japanese toy company.

Ever since that launch, more than 62 different editions of neo-Blythe dolls have been produced and the process is still ongoing.

In 2002, another version of the Neo-Blythe doll was invented, named ‘Petite Blythe’, aka as “Pucci” and it is 4,5 inches high. In the meantime, there are over 100 different editions of this last doll produced.

Have a look at this video where a Neo-Blythe doll is unpacked and shown of.

Someone Else Was Also Responsable For The Revival Of Blythe Dolls.

A photographer and producer from New York, called Gina Garan, also played a huge role in the revival of Blythe dolls.

She made a book in 2002 called “This Is Blythe” and it was packed with pictures of the Blythe dolls.

Later on, she added lots of other books on these dolls, like “Blythe style“, “Hello Blythe” and “Susie says“, and even postcards.

The books showed the dolls in a series of fashion shoots on artistic and exotic backgrounds and they became quite popular.

Some More Info On The Sizes, Structure, Etc.

When you asked yourself: “what is a Blythe Doll”, I would assume that you wondered if these dolls are pose-able? As they are fashion dolls: yes, they are!

You can move their arms, legs, head, and eyes, as explained before. Also, as with Barbie dolls, you can change their outfits and hairstyles.

Beware though, that you can not change their hair or eyes, as they are attached to the big head.

Does A Blythe Doll Have Accesories?

There are tons of Blythe Doll accessories out there!

Blythe dolls could also wear the clothes of Barbie dolls, only full-length Barbie pants will not fit well.

Blythe Tutorials And How To Maintain Your Blythe Doll.

How to wash the Blythe Dolls hair?

All you need to do is wash it like you would wash your regular hair. Just use regular shampoo, rinse it with hot water and put a conditioner on it. Use a straight tooth comb to comb it.

Beware: do not use a human hair straightener for your doll’s hair, cause that will burn it!

How to dye a dolls hair?

You can find the right instructions in the video below!

How to change the hands or eyes on a Blythe doll?

Well, for that question I have another video for you to show!

How to customize these dolls?

For this question, I would like to refer you to this link.

Also, it seems that there are a lot of artists on Etsy who are able to do this for you if you are not experienced in customizing dolls.

How to change a Blyth doll’s hair?

What do you know, I have found yet another video for you haha! 🙂

Where to buy or sell Blythe Dolls?

The best place to buy Blythe dolls would be of course to buy them from official stores in Japan, Singapore, or Hong Kong. Just because these are the most reliable:

Now, all of these, is, of course, a bit difficult to either:

1. Order (because of the websites not being in the English language), or

2. The shipping costs/customs/taxes are way too high to be sent to your country, etc.

You could try looking for original Blythe dolls on eBay, for example, but you need to be careful about imitations or prices that are way too high on that platform.

If I were you, I would rather look for them on Etsy, as there when people review sellers, in my experience these are really to be trusted.

For your convenience, however, in my next blog post, I will review 5 Etsy shops that sell or customize Blythe dolls. So please hold on to next week! 😉

Why are Blythe Dolls so expensive?

The short answer would be: because of their originality.

Original Blythe dolls are no longer in production and didn’t last long on the toy market, so these original ones became collector’s items.

Another reason why these are so expensive is that these are not just meant for kids, they have an international appeal that attracts a very wide audience. They are seen as a form of art and are popular within the world of dolls’ collectors of all ages.

To be totally honest, at first, I was like: iiiiwwww, these are creepy! The dolls look at you like they are going to ‘get you’, as in the ‘Chuky’ movies. Don’t you think? 😉

But when doing the research and watching Youtube clips on “what is a Blythe doll”, I started to see what the fuss is about on this generation of dolls.

Whether you would like to share your creations with an ever-growing community of collectors and people, or you want to develop your photography work through unique ideas and designs, Blythe dolls can create the perfect models for your settings.

I think that I have covered lots of questions on this topic of “what is a Blythe doll”, but if you have something extra to ask then please leave a comment below or join me on my Facebook group.

I wish you a happy crafting/collecting/photographing experience! 6 thoughts on “What Is A Blythe Doll? – Some Insights”