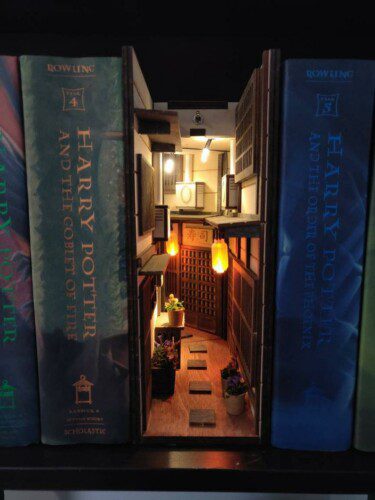 I bet you wonder: what is she talking about again now: a ‘ book nook diorama ‘? What kind of animal is that?

Well, it is not an animal, but it has also everything to do with miniatures 🙂

Let’s explain what it is and if you can eat it or not. A little tip: you can’t haha. But if you are a book-lover, I know that you like to make your reading nook as cozy as you can because it makes the reading experience even more fun, right?

Now you don’t have to worry anymore about where to put your miniatures, because they are specially made for your bookshelf! So they are even functional because this is a fun way to organize your books, per theme.

( In the meantime, I have written several reviews on this fantastic new trend) :

What Is A Book Nook Diorama?

A Book Nook diorama is basically a miniature version of something you can place on your bookshelf.

It creates a cozy atmosphere in your bookcase and it makes your collection of books look just that little bit different.

Now, you could buy a miniature Kit like the one from Robotime called ‘Sams’ Study’, which I wrote about here, or you could try to make one yourself, from scratch, or buy fantastic ones on Etsy or even Amazon.

If you want to support miniature artists, however, there are so many great artists on Etsy. And I will dive deeper into those soon and show you my favorite book nook artists on there!

A little bit of history.

Originally though dioramas, in general, were built, and still are built, by modelers. For example, they would be making small war scenes, including airplanes and such from the world wars.

Or like the, also fantastic by the way, modelers from China, cutting out beautiful pieces of a diorama from wood (how do they do that actually, seems hard ? !).

Or dioramas which are also used for museums, to display for example historical scenes.

But the book nook diorama seems to be something fairly new and has found its way to the internet. Mostly on the 1:12 scale, it appears, so that is why I am including this on my website.

The measurements are roughly the height and width of one or two books. The concept became very popular on Reddit, with the book nooks subreddit going from zero to 7,900 members in just two days.

Wich Kind Of Themes Do Book Nook Makers Use?

Very typical for book nooks diorama’s are fantasy scenes, from Harry Potter to ‘Dungeons and Dragons’ scenes, hobbit holes, or any other ‘magical’ scenes.

Of course, there are all kinds of alleys, which are my favorite honestly. I mean, look at this one for example, isn’t that like WOW?  Also, look at this fantastic video on Youtube:

Just imagine passing a bookshelf full of these, you couldn’t stop yourself from watching now, would you?

It looks like the pioneer of book nooks was the Japanese artist Monde, who started to make them in 2018 and now still makes about 2 works per year. He has become an inspiration to book nook artists worldwide.

Let me take you away on this path of amazing book nooks and my all-time favorites!

1. I believe this one is from a laser-cut book nook -kit.

4. I believe this one is from the same maker as number 3, but I can not find the artist’s name, no one mentions him or her.

5. A French and older alley. Lovely!

6. A pretty little terrace scene, stuck between books on the right and the side of the bookshelf.

7. Look what comes out of the walls! (maybe not get this when you have kids haha)

8. This reminds me of little fairy gardens, but then made for the size of books nooks.

11. I made one myself from a book nook kit and here’s the video on Youtube!

So, of course, you can create your own book nooks diorama, but if you would like to cheer up your bookshelf a little bit faster, then keep an eye on my site, because I will write a separate article soon about my favorite book nook artists on Etsy!

Do you have any questions about this topic or would you like to give your opinion about it, just leave a comment below this article or join my newest Facebook group!

I wish you happy crafting and/or collecting!

UPDATE: I now have some reviews ready from artists from Etsy on book nooks here!

AND I made one myself and LOOOOVE it!