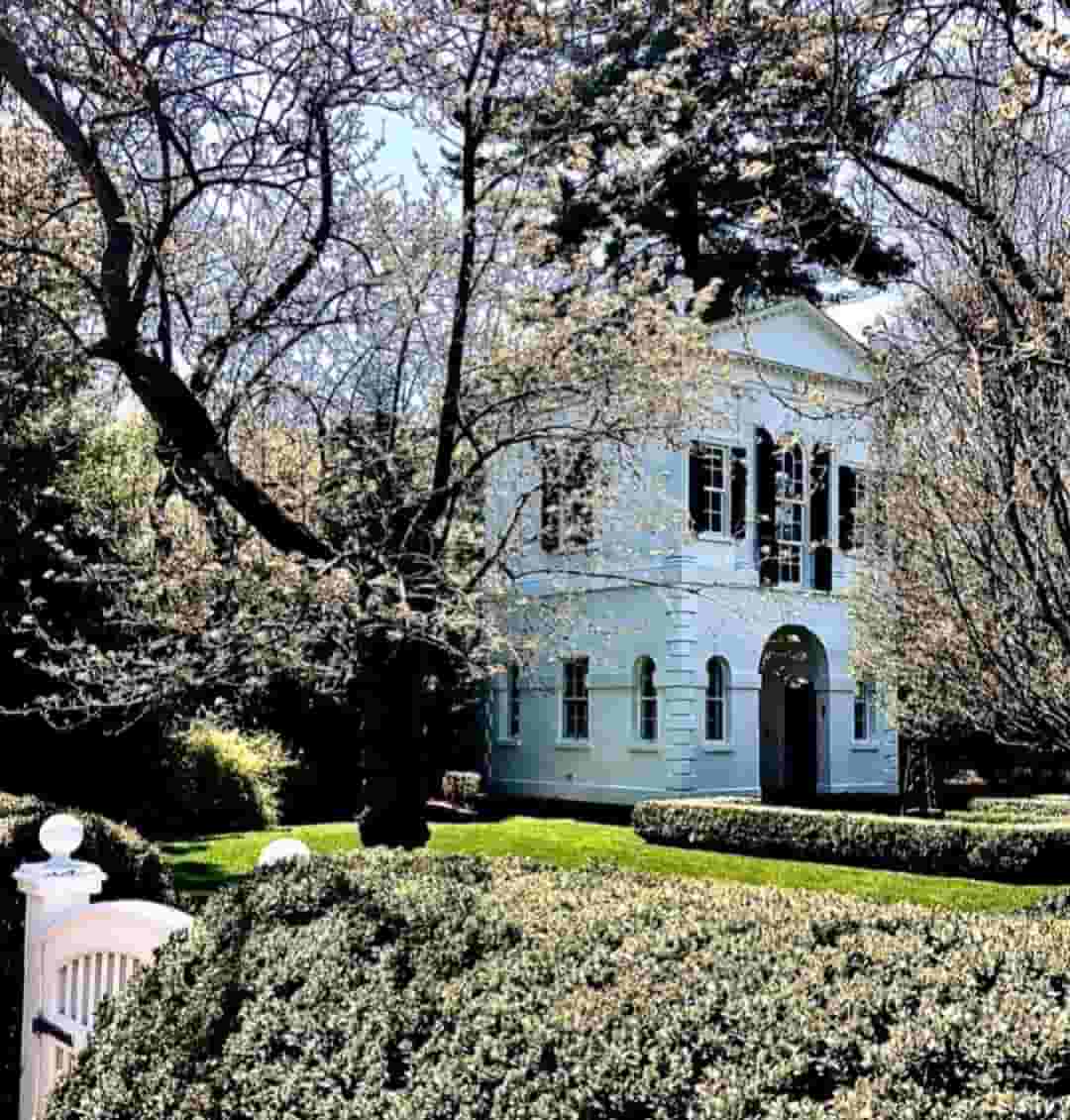 In previous tutorials on my site (there’s too much there to sum them all up), I have talked about a lot of different architectural styles and the dollhouses made from them. Today, however, I am going to explore the question: “what is the Federal Style”, and how does it translate to our dollhouses and miniatures?

Let’s just dive straight into things, shall we?

What Is A Federal-Style House?

So, a little bit of history first.

The Federal architectural style (aka the Adamesque or Adam-style), was the classicizing architecture of the United States, between 1780 and 1830.

In particular between 1785 and 1815, and it almost fell into the same time period as the Federalist Era in American history.

(“Classicizing” means that it imitated a classical style.)

When the republic in the US was just founded, this generation consciously chose to build their houses and such, influenced by Ancient Greece and Rome.

Still, under influence of the Greeks, the Neo-Grec style emerged, which remained until the 1850s.

So basically, there was the Roman sense of balance and symmetry (which was also present in the Georgian style architecture of the British colonies in America), but the Federal-style added new Neo-Classical motifs, like the British architect Robert Adams did.

This style became pretty dominant in the buildings from the newly founded government, like hospitals, harbor buildings, and lighthouses.

Only the wealthiest sector of early Americans could effort to build and furnish their homes in this style.

The first professional and colonial architects like Charles Bulfinch and Minard Lafever designed in the Federal style.

In the video below, you can see the difference between a Georgian-style home and a Federal-style home:

A Bit Of A Description Of This Style.

The Federal Style is luxurious yet understated, so the exterior is plain, reflecting the period and sensibility prevalent in the early American colonies.

Dental blocks are a home mark of the Federal style and large windows reach almost from floors to the ceiling.

Many Federal homes have Neo-classical columns with vertical “flutings” ( the grooves running vertically on a column shaft or a pilaster ).

On the inside, crown moldings or curtain cornices were often decorated with bas relief looking like garlands or other decorations, and more dental blocks.

What Is Federal Style Furniture?

The answer to this question isn’t very straightforward, as the Federal style furniture is mostly rooted in European style furniture and the information online is very confusing, but I will give it a go. (don’t shoot me if I say something totally stupid lol).

Federal-style furniture had graceful lines and simple, yet elegant shapes. It was often made of mahogany or cherry wood.

Sofas had low backs, long seats, and clean edges. They often had rich gold and deep red damask prints, which reflected the colors of the colony. Also, the motifs often had bumblebees and classic medallions.

Only wealthy house owners could afford a carpet to cover their wooden floors.

Curtains in that time period were formal drapes made from silk or velvet, with plenty of tassels.

Lots of decoration pieces in these homes feature the American patriotic eagle or busts of the early American presidents and founders.

This video below on Youtube represents a tour of a typical early Colonial-style home and interior.

I wonder why that it was so hard to find, specifically, focussing on the term “Federal-style”, or even Colonial-style, looking for miniature professionals on Google or Instagram, etc.

Because I just know that this style is often used in America, obviously. I think that the specific term isn’t used much in the dollhouse world or maybe is often confused with other styles, like the Georgian style? I have no clue 😉

When I look for them, it is often more about shops selling these houses or dollhouse kits, not about any actual artists making the houses from scratch.

Maybe this is because the exterior designs are rather “simple”? (again, please correct me if I’m wrong 😉 ).

Through Pinterest and such, I did find some artists that make awesome colonial/federal style miniature furniture though. (I would guess that those are a lot harder to make).

I did find these tiny dollhouses, though, in this style, and I love them!

These are made by VictoriaMiniland, which represents a Center for Handcrafted Miniatures. It is a store from Canada that is specialized in high-end products made by artists from all over the world.

So sadly, I can not say who specifically crafted these Federal-style dollhouses on the scale of 1:144.

MOMOJOJO2020 only makes dollhouse kits on a scale of 1:144 (and isn’t specialized in them), so not finished colonial-style dollhouses, but I thought I would still mention these cute ones.

I found this miniaturist on a Facebook miniature group when searching for ‘Federal’, but I found out that he also has an Instagram page.

The pictures I saw on there of his dollhouse furniture in this style, made from scratch, are absolutely professionally made, in my opinion!

Janine Rigano is selling a few miniatures in this style and also a cute little rug with an American Eagle on it. I thought that I would mention this one as well ;-). Have a look at her Etsy shop here.

I had some issues in finding enough information on dollhouses made in the Federal style from scratch or finding artists specialized in it. There are more people who make the furniture for it.

Is this because it is not so popular as the Victorian style, for example? I would guess that that is a fact, correct me if I’m wrong 😉

But still, I see a lot of people selling dollhouse kits in this style or selling the furniture, so I will review those ones later on in a new blog post.

If you have any questions or would you just like to chat then please leave a comment below or join me on my Facebookgroup.

4 thoughts on “What Is The Federal Style – Who Crafts Dollhouses In This Style?”